In view, out of view

Click image to load interactive display and zoom in on images… 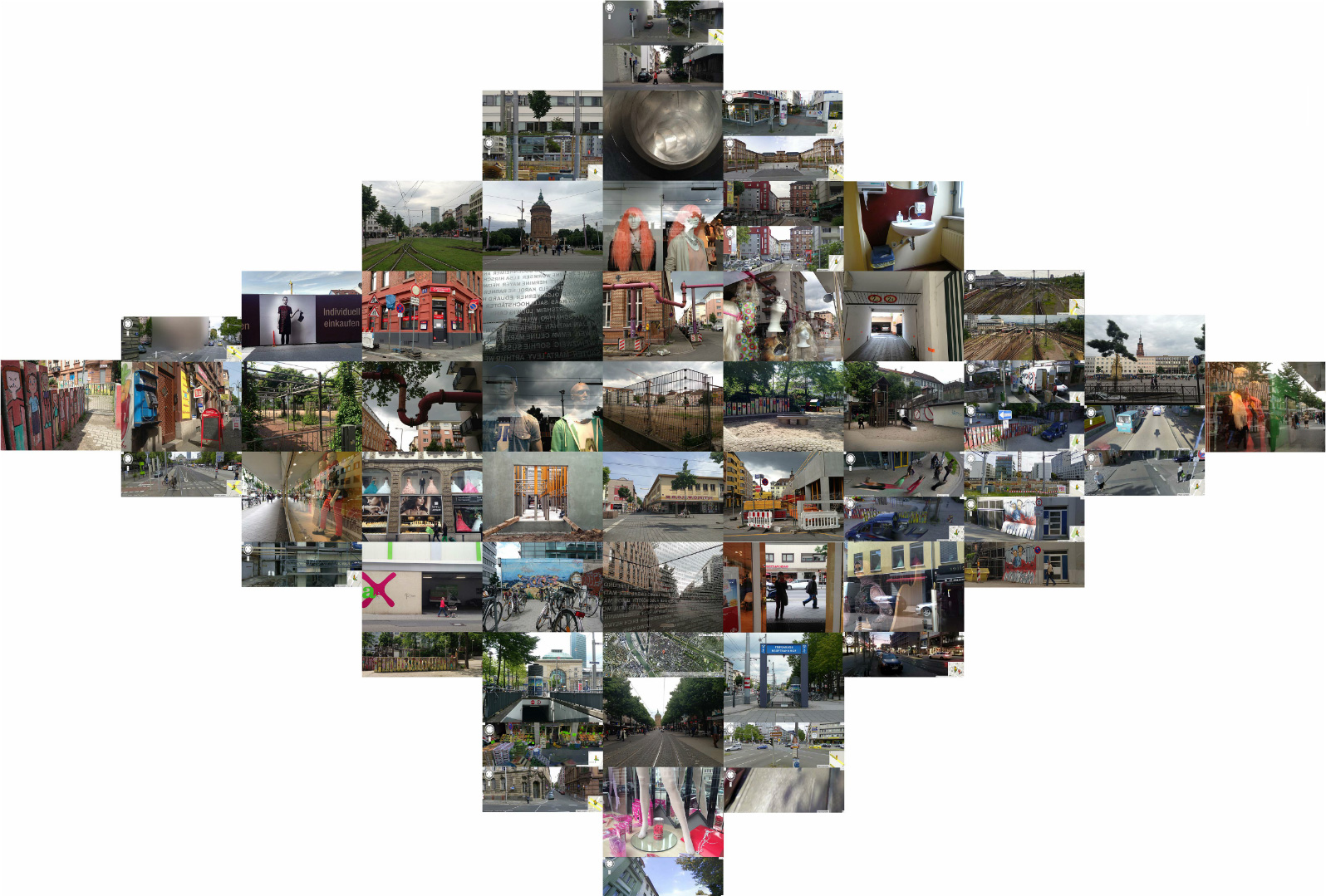 How do we experience the distinction between public and private? The last decade has witnessed the introduction of technologies that dramatically have shifted the contours of debate. Even the notion of maintaining a clear separation between the two has come to seem tenuous. Increasingly, virtual realms are becoming entangled with their physical correlates. We use one to understand and navigate the other, and vice versa too. The “local” becomes both multiple and concurrent. But in this, our off- and online worlds are not just interconnected; they have become interdependent. We actively rely upon services like Google Maps for navigation, and yet it is our use of it, along with broad-scale surveillance, that allows for it to both function and be effective. Information once commonly assumed to be private is now electronically sourced, recorded and anatomized en masse.

Some of this is data we willingly provide; much of it we unwittingly concede; and yet further data is gathered regardless of whether or not we assent. At a time when the capabilities of digital technologies are accelerating at high speed, we are at a critical transition. What spaces or places have yet to be digitally surveilled? How is our perception of “private” versus “public” spaces changing? Where might unsurveilled spaces remain, if in fact they remain? And to the extent they do, what might these places physically look like? Or feel like? How might we look back on them tomorrow?

In 2013, I set out to explore these and related questions. With my camera, I went to Mannheim, Germany, to photograph the city center. Why Mannheim? The idea started with Google Street View. Circa 2009, Google Street View cars began circulating in Germany and documenting German landscapes. In a country particularly sensitive to privacy issues, public uproar was fairly swift. As a result, the German parliament decreed that members of the public should have the option to “opt out” of having views of their residences included in Street View data. But Google received such an overwhelming number of opt-out requests that they were obliged to suspend further Street View projects in Germany. Mannheim was one of the few German cities that actually already had been cataloged by Street View, even if the undertaking was not complete.

For me, then, Mannheim seemed like a good point of departure. For one, it was a place that was new to me; I could explore it with fresh eyes. Second, it offered an example of a place where one form of digital surveillance had started and then (at least for a time) had stopped. In other words, it was a city on the digital cusp.

Certainly, Google Street View is/was far from the only visual surveillance technology being deployed in Mannheim or elsewhere in Germany. From my perspective, it was simply one of many possible directions to explore. But centering on it gave me an excuse to probe the kinds of questions that had been on my mind; it helped train my focus.

Even if Street View had had an early presence in Mannheim, it was still far from succeeding in visually capturing the full range of the city’s public spaces. Whether by virtue of physical, legal or technological limitations, a variety of factors had colluded to create “gaps” in Street View’s inventory. Those lacunae became my target. I wanted to discover and document them, to understand what and where they were. Ultimately though, the project became as much about exploring a state of mind vis-à-vis public/private space as it did about understanding the particular physical/digital spaces themselves.

The first question I framed was how to identify or define these gaps in Street View coverage. To begin with, it is important to understand how the technology is configured. Using specially-equipped cars, (and, more recently, bicycles, trolleys, snowmobiles and trekkers too), Google Street View captures images on the “level of the street,” thereby approximating what a human would see while walking. Google Cars are affixed with 15 cameras that sequentially record 360-degree panoramic images taken at regular intervals along the vehicle’s driving path. Online, software works to stitch together these panoramic images into a semi-connected flow, allowing site visitors to view specific locations or else to zoom through parts of neighborhoods click by click. But visual distortion and gaps are central to the experience.

The pathways made visible via Street View are confined to those where Google’s cars physically are able or legally allowed to drive. Pedestrian areas, narrow alleys and Straßenbahn (street trolley) paths are all excluded — as are elevated, submerged and/or interior spaces. In Mannheim, these are places Street View principally could not see. Furthermore, the photos are shot by cameras suspended on poles that rise high above the roofs of the cars, an arrangement that makes the images seem as though they might have been taken by giants. The view is from on high. An extreme wide-angle lens adds to a sense of strangeness. Added to this, the fact that Street View cameras shoot still photos and not continuous video means that there are regular gaps between the images — something Street View attempts to compensate for by blurring or digitally stretching the missing areas. If a large truck happens to be blocking the cameras’ view when the Google Car drove by, this creates another form of visual obstruction.

Taken together, the above represent some of the distortions necessitated by the technology or physical conditions involved in creating Street View. Simultaneously though, there are instances when Street View deliberately attempts to erase objects from view. Primarily, this is in response to legal requirements, such as the strict ones in Germany, or else in consideration of more general privacy concerns. Because of these, human faces get blurred, car license plates obscured, designated buildings blocked. From the perspective of an online user of the service, this sometimes can make moving from one Street View screen view to the next somewhat surreal: we encounter an entire crowd of faceless people or a full block of blurred out buildings.

Matters of time, memory and perspective are further aspects that impact the online experience. Since Street View images are not continuously updated, and (in 2013) a good number of those from Mannheim were four to five years old, significant discontinuities and anachronisms can emerge when comparing Street View’s images with their “live” correlates. Where a small tree once stood, we now encounter a big one. Where a chaotic construction site once appeared, a solid, tall building now blocks a deeper or broader view of the scene. Similarly, processes of decay similarly may be revealed through comparison, given the time gaps involved. As a result, Street View occasionally feels like an old scrapbook, reminding us of the passage of time, while simultaneously concealing what actually may be there now.

Cities like Mannheim are both lived and imagined spaces. They are populated by people and things and ideas that are constantly in flux and cannot be fixed in time or reduced to two dimensions, online or otherwise. There will always be spaces experienced as private; it’s just a matter of what they will look like and how we might perceive them in the first place. At some point, as technological options improve and laws change, “gaps” like the ones described (and visually documented) here are likely either to change in form or else cease to exist. Surveillance will cover more ground, and at the same time become less — or at least seem less — conspicuous. Describing the future of visual surveillance, Michael Chertoff, former Secretary of Homeland Security under U.S. president George W. Bush, had this to say:

“…imagine that millions … walk around each day wearing the equivalent of a drone on their head: a device capable of capturing video and audio recordings of everything that happens around them. And imagine that these devices upload the data to large-scale commercial enterprises that are able to collect the recordings … and integrate them together to form a minute-by-minute tracking of the activities of millions. That is almost precisely the vision of the future that lies directly ahead of us.” (Chertoff 2013)

Hence the question: how will we remember the moment we are in now? How will we think of privacy, or for that matter visual surveillance, in the future? Will we miss the gaps? Or will we instead forget that they ever existed?